The straw hat is a staple in any summer wardrobe. Not only is it sun smart, but it’s also pretty stylish to boot. Most incarnations of the straw hat involve the classic combination of natural straw and a black ribbon band, either in a fedora or boater style. While you can’t beat a classic, sometimes you’ve just got to inject a bit of colour into your life. Luckily, you can easily give your tired straw hat a complete makeover in just a few short steps. From switching out the ribbon band to the addition of a raffia trim, these are just three colourful ways to update a plain straw hat. 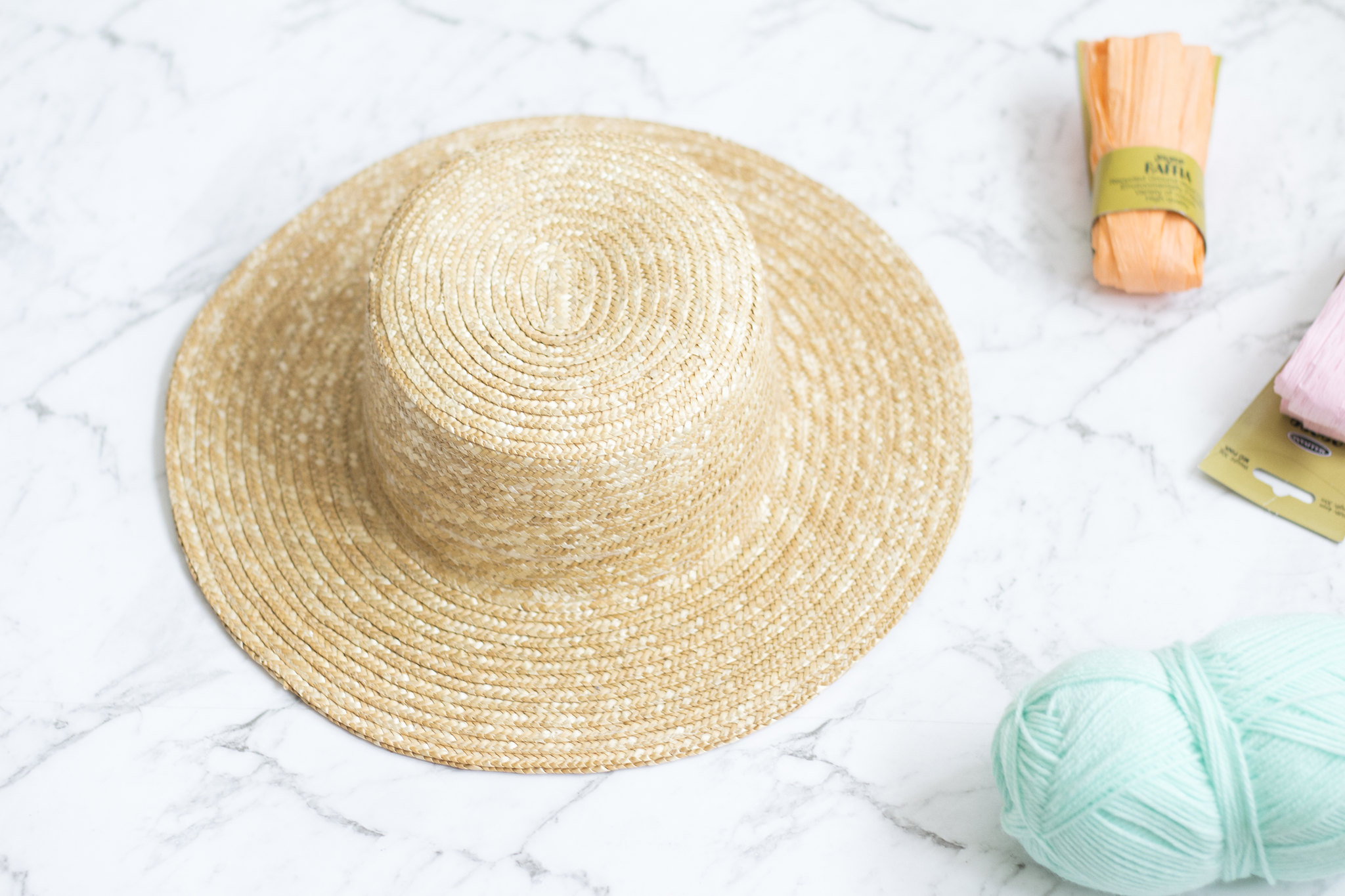 First things first, you need a straw hat. You can get these pretty much anywhere, from secondhand shops to boutiques and everything in between. If the hat comes with a ribbon band attached, remove it before undertaking any of these DIYs. If the ribbon is glued on, blast the band with a hairdryer for a few seconds to melt the glue and then peel it off. 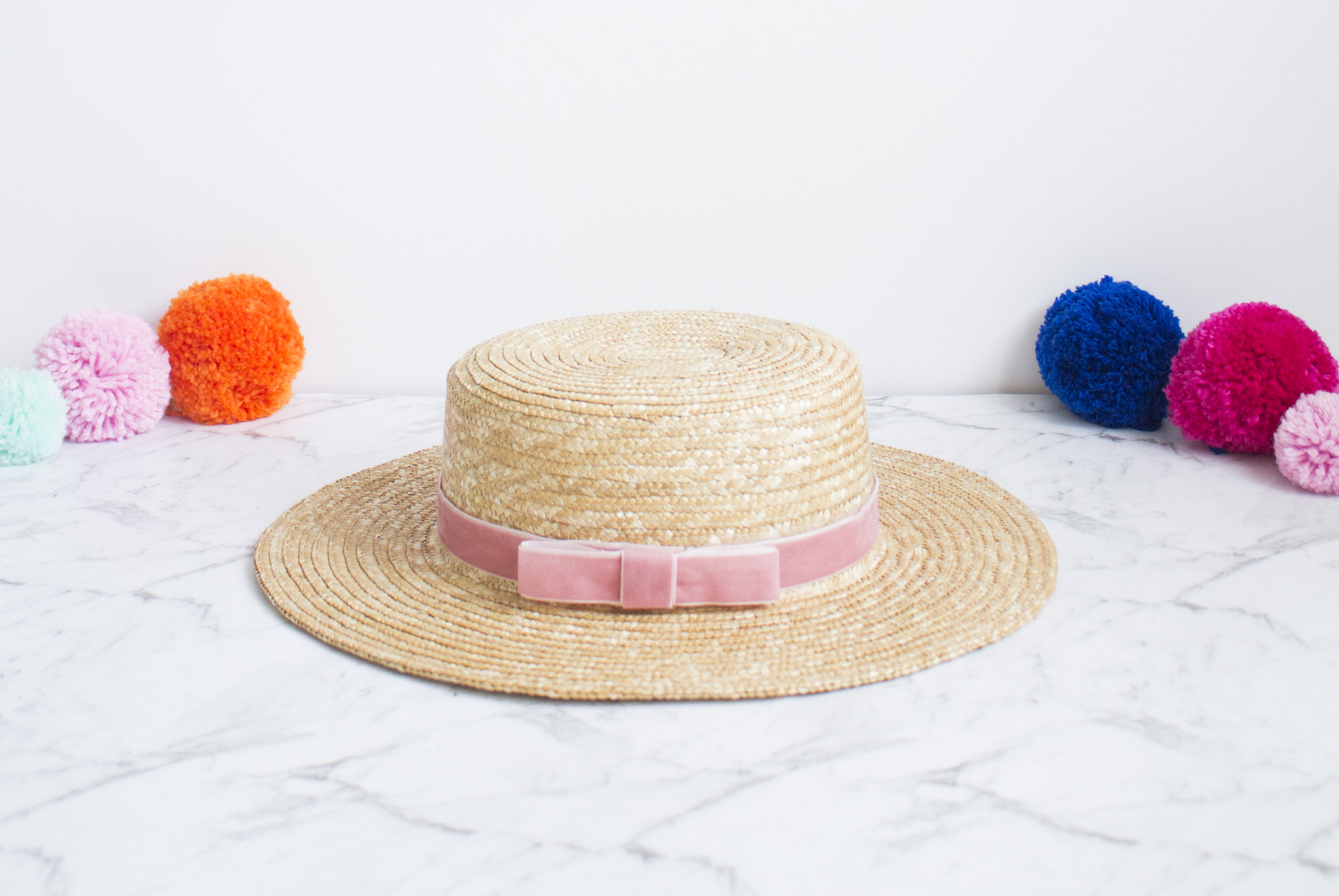 – Straw hat
– Around 1m of velvet ribbon, in the colour of your choice
– Scissors
– Glue (a glue gun or regular craft glue is fine) 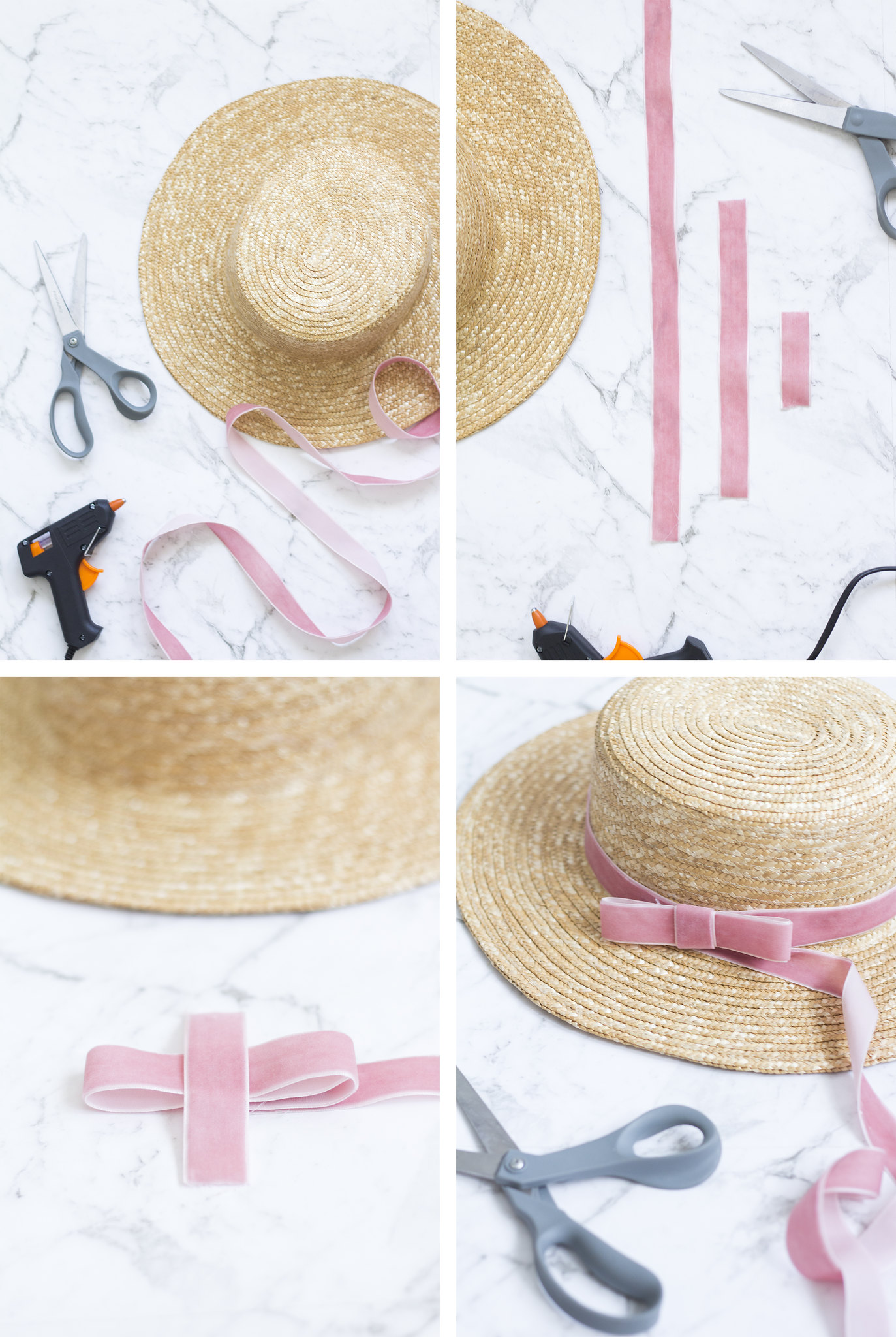 1. Measure out and cut enough ribbon to surround the body of the hat. I just did this by wrapping the ribbon around the hat and leaving a little bit extra. Cut a smaller piece to form the bow – the size of which is up to you. Once again, I used my eye to measure rather than a ruler. Then cut a smaller piece of ribbon to wrap around the bow and band.
2. Create the bow by folding the ends of the middle length of ribbon behind themselves, securing at the centre back. Attach this to the longest length of ribbon, with the velvet sides facing up. Take the shortest ribbon band and fold it around the centre of the bow and the longest length of ribbon, securing it at the back with glue.
3. Once dry, wrap the ribbon around the hat, with the bow to the side. Cut off any excess ribbon.
4. Glue the ribbon directly onto the straw hat, with the ends meeting behind the bow for a clean finish. For something less permanent, you could glue the ribbon ends together and slip the ribbon on and off as you see fit. 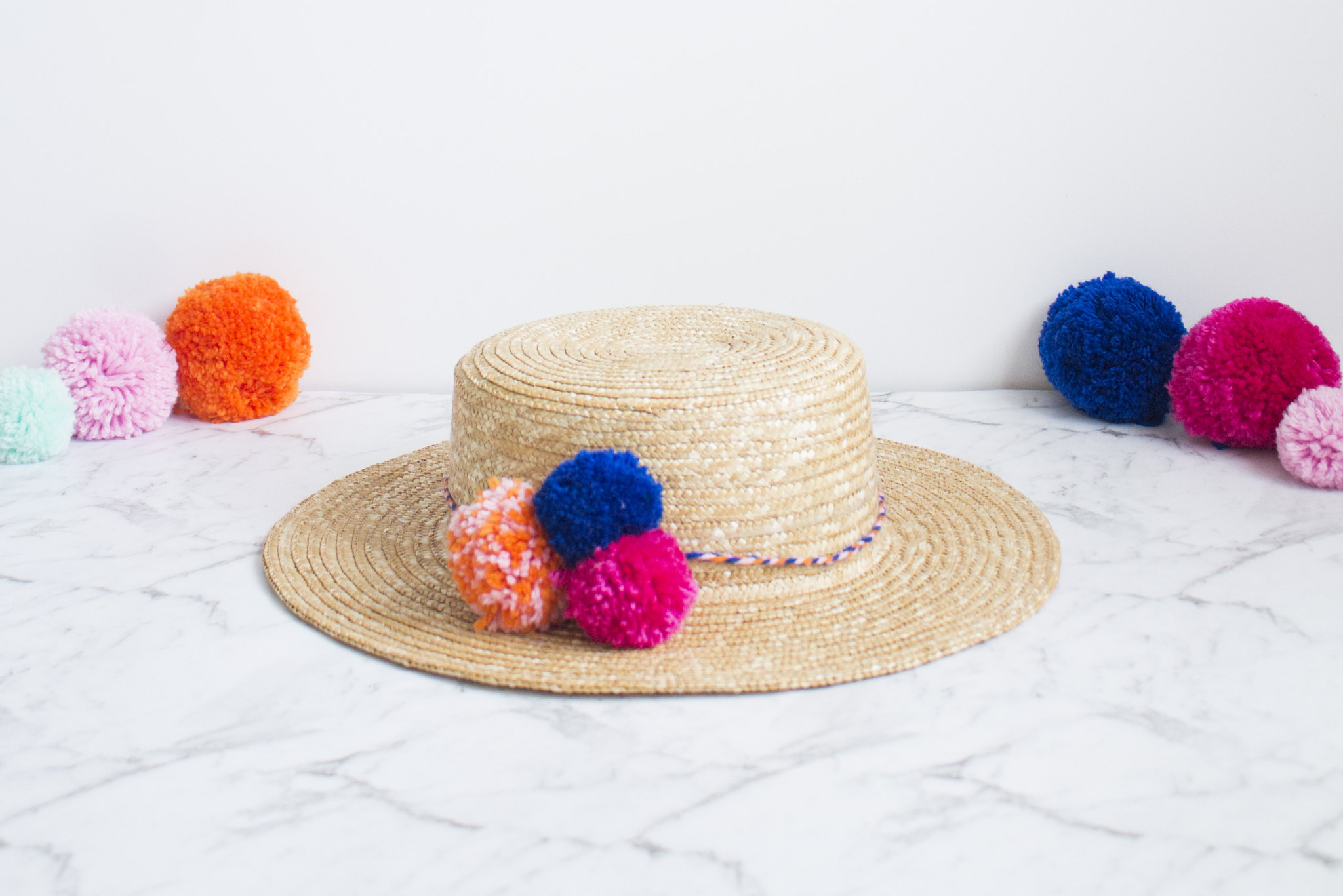 – Straw hat
– Yarn, in colours of your choice. (Alternatively, you could also use other materials to create the pom poms like raffia, scraps of fabric, or plastic strips.)
– Scissors 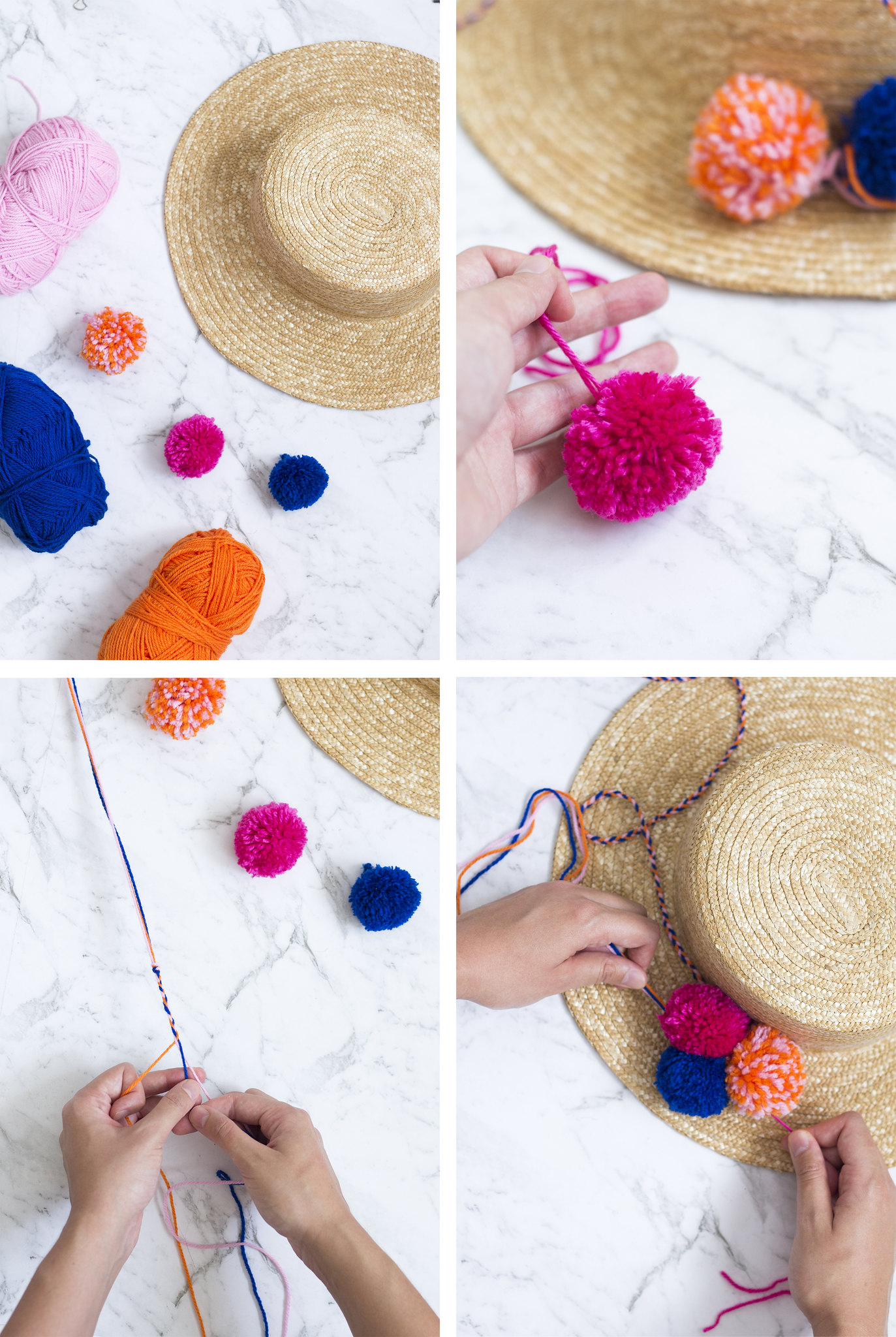 1. Make the pom poms (or you can use store-bought ones). Because I am a bit of a pom pom fanatic, I just happened to have some at the ready. I also have a pom pom maker which makes things much simpler. There are also plenty of online tutorials to help you through the process.
2. If you’re making your own pom poms, make sure you leave a long enough piece of yarn when tying off the pom pom so that you can use this to attach it to the band later.
3. Plait the yarn (or any other materials) to create a band long enough to wrap around the body of the hat.
4. Tie the pom poms to the band, in the arrangement of your choice, with the pom poms to one side of the hat. Then tie the ends of the plaited band together to secure it in place. Alternatively, you could use a wider band and glue the pom poms on. 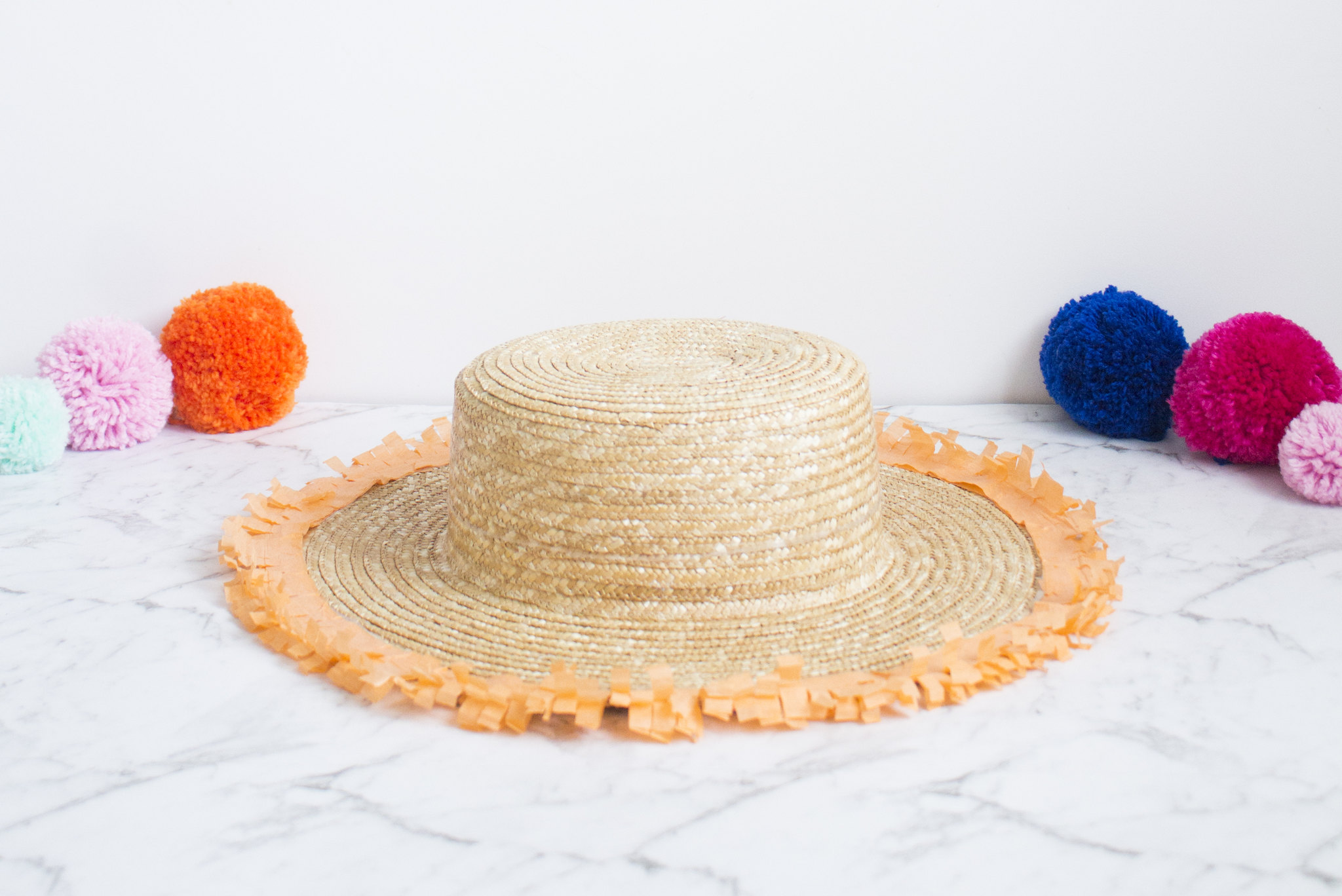 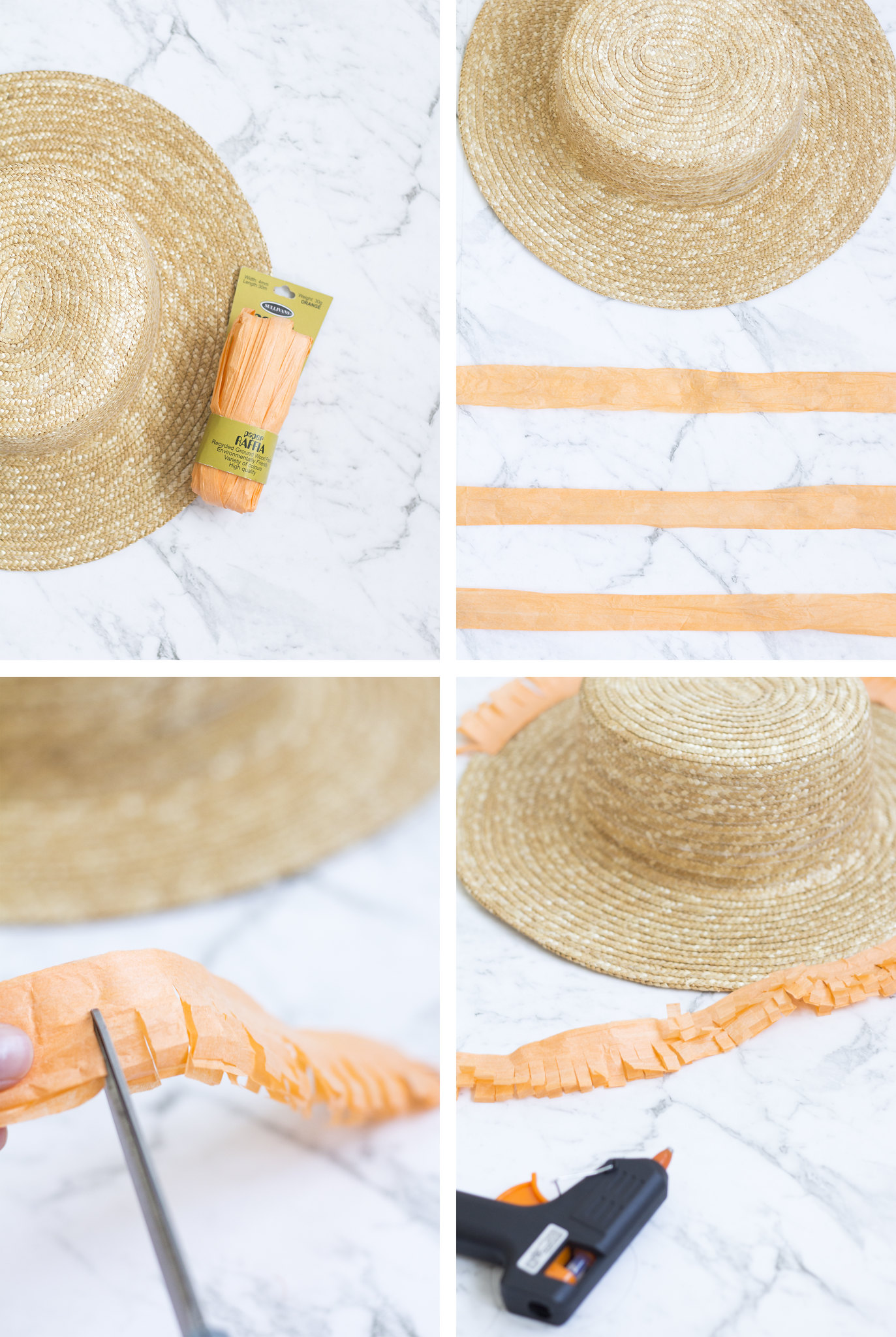 1. Unravel the raffia so that the band is at its widest (usually around the width of a ruler).
2. Cut three strips of raffia (or more, depending on how thick you want the trim) long enough to surround the edge of the brim of the hat. I once again used my eye, but you can use a measuring tape to be more accurate. Glue the top edges of the raffia together and let dry.
3. Using scissors, cut into the bottom edge of the raffia at 5mm intervals, leaving around 1cm at the top of the band.
4. Working in sections, glue the top of the raffia to the brim of the hat until the entire edge is covered. Trim off any excess and let dry.
——-
And there you have it. Three easy DIY projects that will update your old straw hat in no time at all. I was also looking into dyeing a straw hat as another option but the time and effort that would require kind of put me off. Do you have any other fun ideas for updating a straw hat?