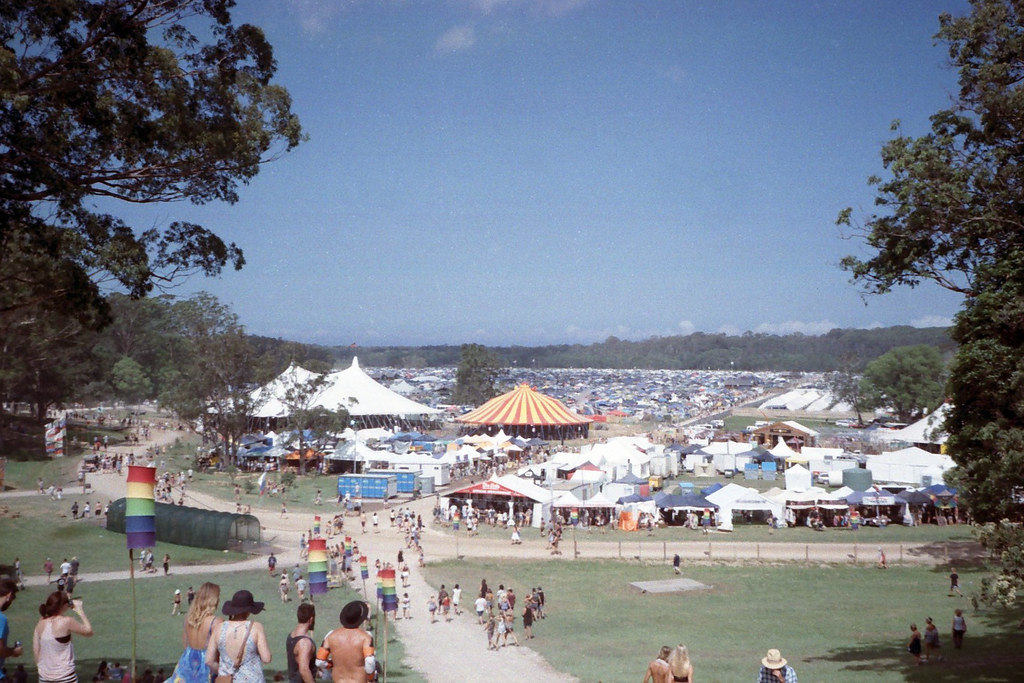 Remember how it took me 6 months to develop my film photos from Sydney? Well, here are my photos from Falls Festival at Byron Bay nearly a WHOLE YEAR LATER. Timeliness is not my strong point, obviously. Although, with Falls Festival coming up again soon I guess this post is sort-of-maybe timely again. I really wanted to embrace Falls Festival, because I’d heard so many good things about the Lorne and Marion Bay festivals, however Byron Bay didn’t really cut it for me. Don’t get me wrong, the musical acts were all top notch, but the entire experience just wore me down. Which is weird because usually I love Byron Bay festivals. Despite being a pretty adept camper, I struggled with the festival camping situation. The searing summer heat, thunderstorms, and bare minimum shade really got to me in the end. And don’t get me started on those composting toilets. It probably didn’t help that I was coming down with a summer cold, either. Thems the breaks I guess. For those heading to Falls at Byron Bay this year, the following is a list of things I learnt or would do differently if I had the chance.


1. Test out your camping gear. Make sure your tent can withhold a thunderstorm. Summer storms are rife around these parts and you don’t want to be caught off guard. We were lucky in that our cheap tent from Kmart held the rain at bay (#blessed) but others around us with seemingly solid tent set ups weren’t so lucky.
2. Wear sunscreen. LOTS OF SUNSCREEN. Think the amount you’ve put on is enough? Nope. Double that. Apply that stuff liberally. Shade is a luxury on these grounds. Also avoid wearing anything that’s going to leave you with a weird tan for the rest of the year. Learn from my mistakes etc.
3. Start training for those hill climbs NOW. One of the main entrances to the amphitheatre involves hiking up a bitch of a hill. If you’re constantly zipping between stages, you will feel the burn. There ‘s another entrance to the amphitheatre on lower ground but it’s not always the most direct route. Start on those squats and lunges now and by the time the festival rolls around everything will be a cake walk.
4. Plan your escape and stick to it. If you’re staying the full length of the festival, avoid the mass exodus and potential traffic jams by leaving super early on the last day. I’m talking pack most of your gear the night before and leave at 5:30 in the morning early. As someone who survived the great Splendour in the Grass/Woodfordia traffic jam of 2010, I have well and truly learnt my lesson. Every minute counts. If I were to do Falls again I would even consider booking accommodation elsewhere for the final night and not have to deal with the mad rush to leave in the morning.
5. This is one of those wishful thinking tips but if you can, scam some VIP passes. Anything VIP. Even if it’s not *really* VIP. Just so you at least give yourself the chance to use some clean toilets/access some shade/avoid queues… anything. One time I won VIP tickets to a festival I would usually avoid but HOLY MOLY what a difference proper toilets/full-strength alcohol/VIP viewing platforms/not having to deal with shirtless bros makes. This is probably just coming from someone who is getting older and more weary of festival crowds but whatever.
There are definitely way more generic advice tips like drink plenty of water, pack snacks etc. but they’re pretty much givens and these were my main takeaways from the festival. The only festival I’ve got lined up this season is Laneway and luckily that’s a one day-er, at home, and rarely requires any planning other than “just show up and have a good time”. 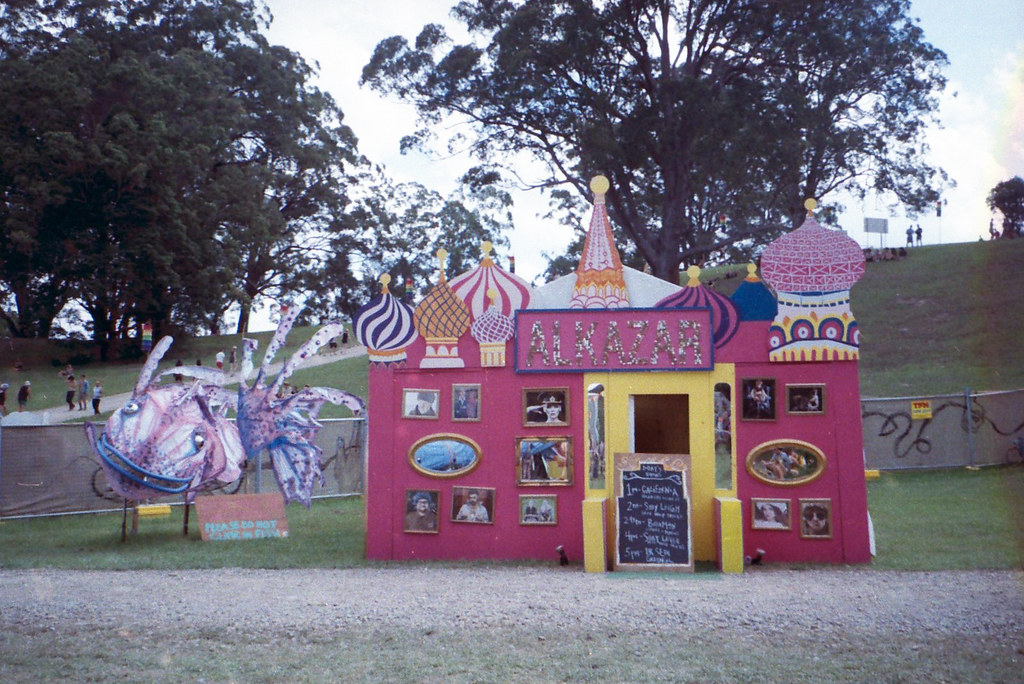 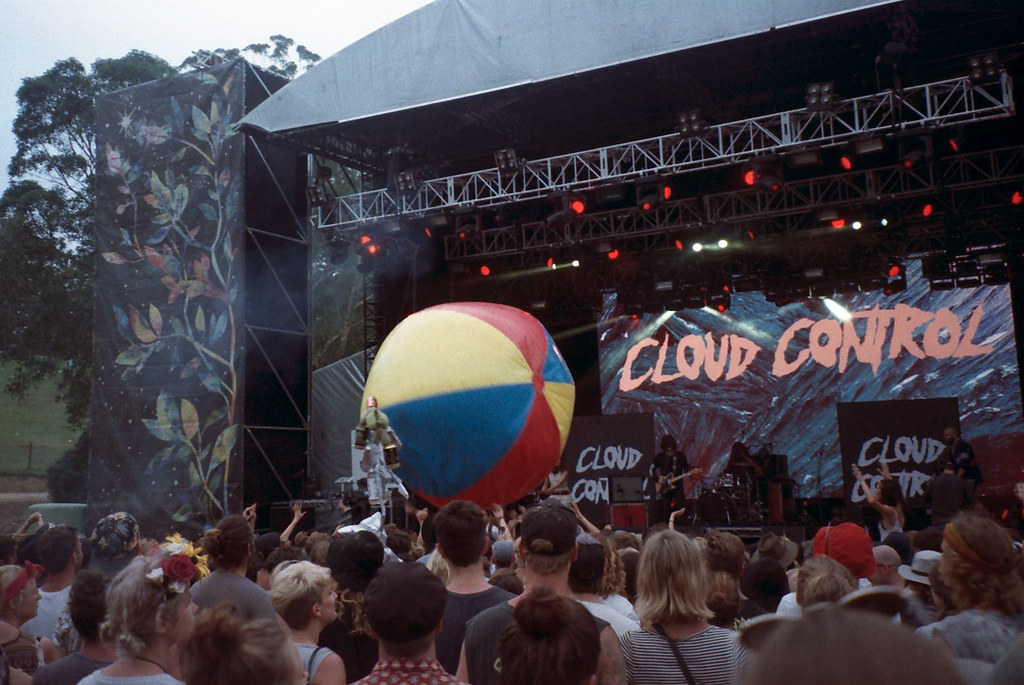 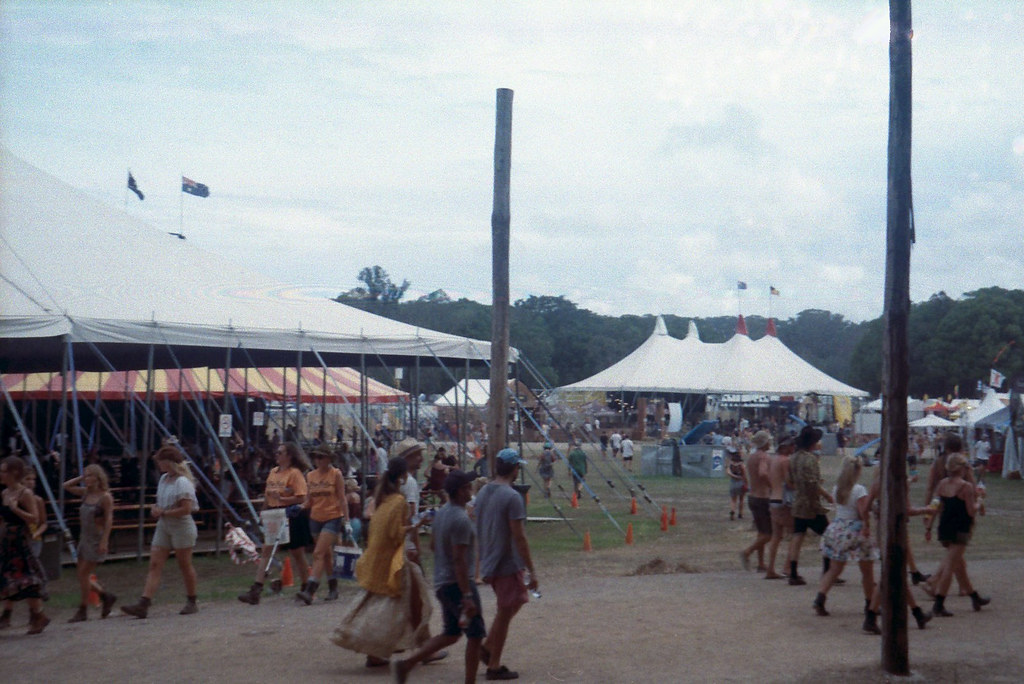 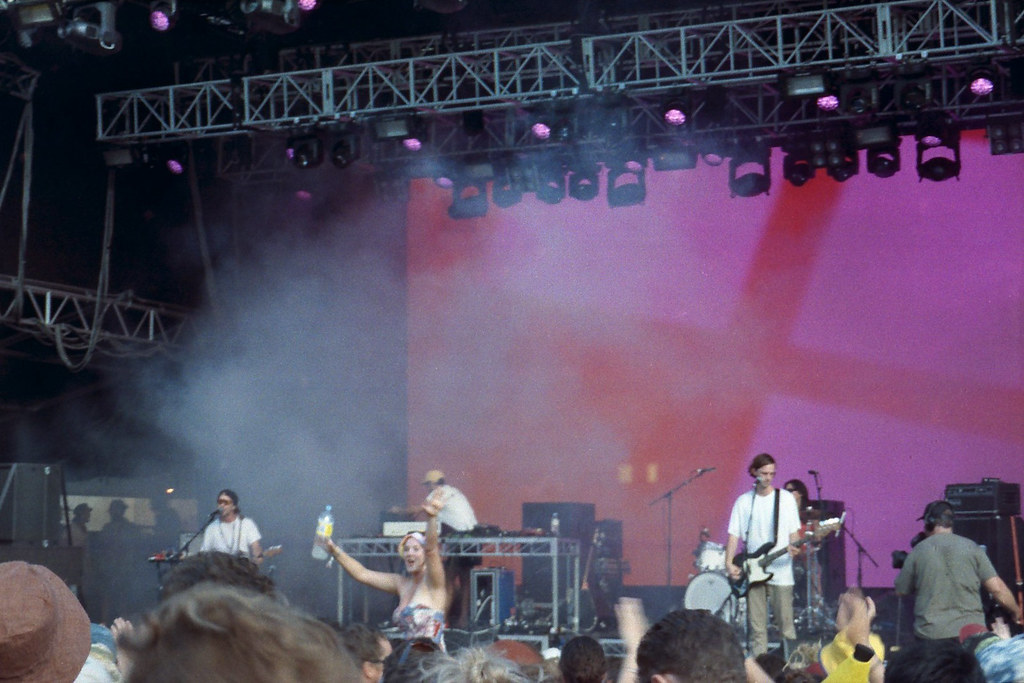 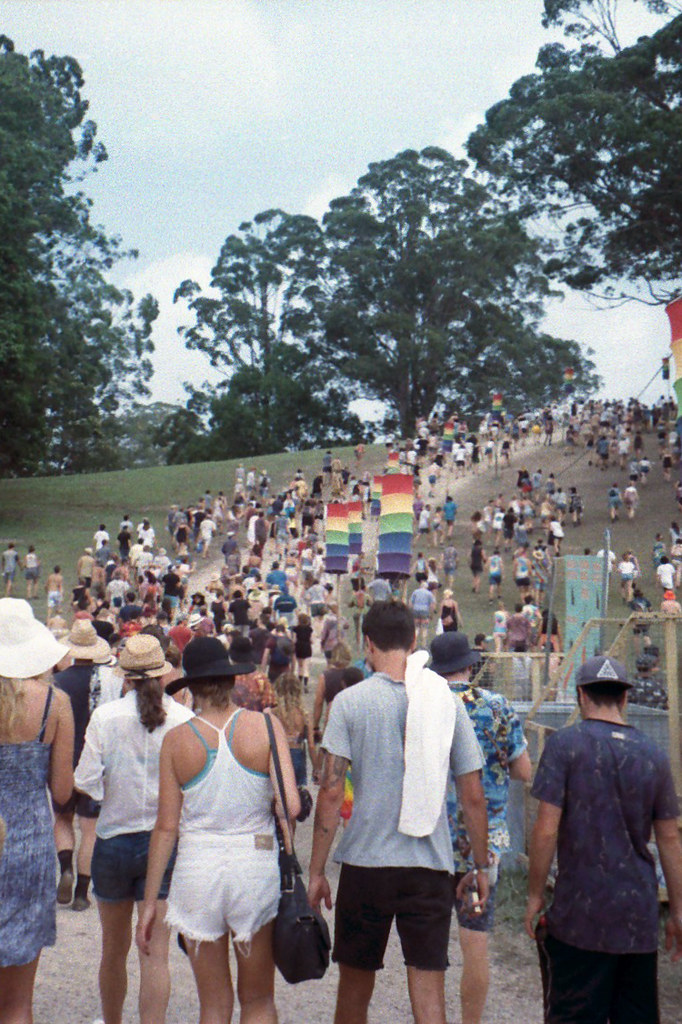 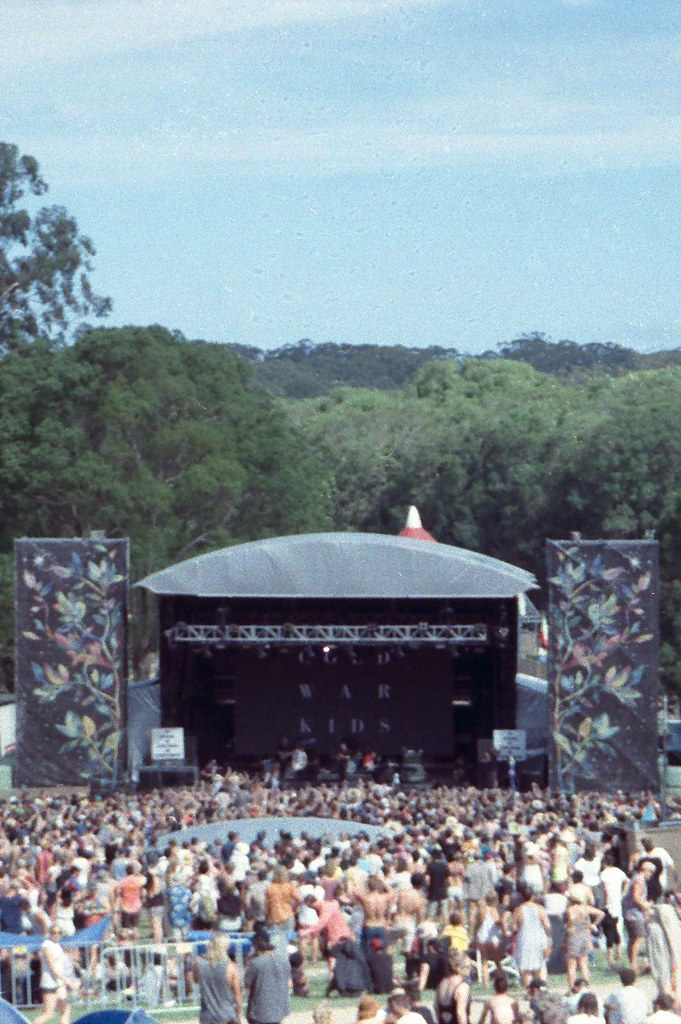 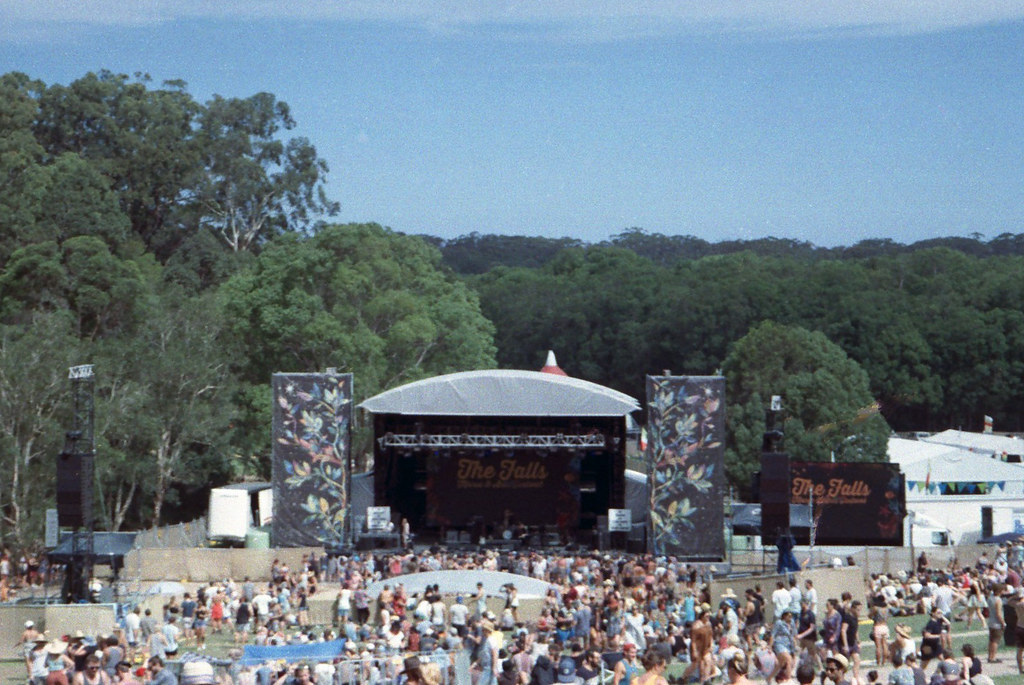 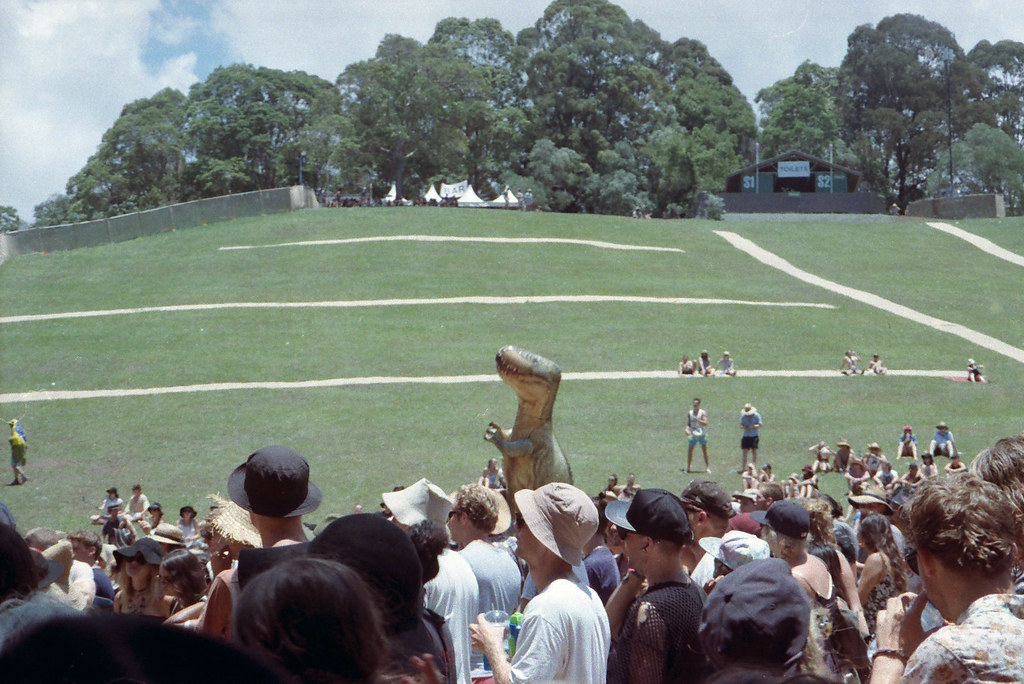 ^ Someone brought a T-rex along to Tkay Maidza’s set. They probably couldn’t find a Brontosaurus.

splendour in the grass: pic me!

splendour in the grass: day one